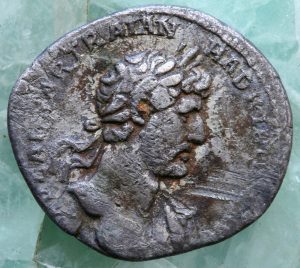 Description and comment: Emperor Hadrian 117-138 AD, born 76 AD. He spent most of his reign visiting the provinces of the Roman empire and greatly improving the defences of the frontiers – hence the building of Hadrian’s Wall from Tyne to Solway. Dedicated to the improvement of the state, he was considered to be one of the most stable emperors to occupy the throne. On the reverse of the coin the goddess Concordia, enthroned, holds a Patera, a libation bowl and rests on a statuette of Spes, symbolising Hope. A Cornucopia, Horn of Plenty, lies beneath her seat.

Reverse Inscriptions: Hard to read, but the worn letters represent PMTRP (stands for Pontifex Maximus a post for life as head of the Pontifices – one of the 4 senior colleges of priests in Rome) TRP (a Tribune of the People, originally a post to protect the rights of the lower classes). COS 11 means the second year of an office as Consul, granted by the Senate for 1 year at a time. Shows CONCORDIA (equivalent GREEK GODDESS HOMONIA) enthroned holding a Patera, a libation bowl. With CONCORD in exergue. 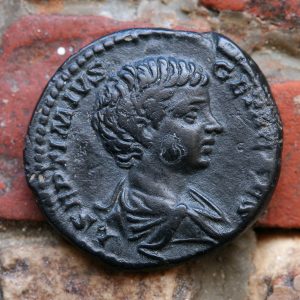 Description and comment: Emperor Publius (or Lucius) Septimius Geta 198 – 211 AD, born 189 AD. The boy emperor Septimius Geta was given Caesar aged nine, in 198 AD when his brother Caracalla was made Augustus. He took part in the British campaign of 208 AD and is thought to have walked through Godmanchester with his father the great African general Emperor Septimius Severus who came from Leptis Magna. Geta was created Augustus himself in 209 AD.  Septimus ruled Rome from Hadrian’s Wall, but grew ill and died there in 211 AD. On his death, he is thought to have advised his sons ‘Be harmonious enrich the soldiers and scorn all other men’. Instead, after less than a year of joint rule, Caracalla murdered Geta and up to 20,000 of his supporters, in December 211 AD. The image shows Geta as a boy, one of the few Roman rulers to be shown in this manner. 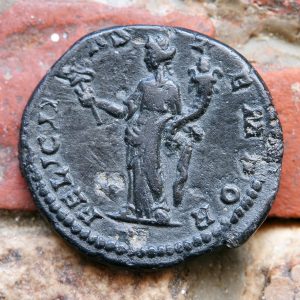 Felicitas, goddess of Happiness and prosperity is on the reverse. Standing left she holds the Caduceus, the wand of wellbeing, associated with that most popular, good fun and mischievous of Roman gods, Mercury, and decorated with snakes and wings. She also holds a Cornucopia. 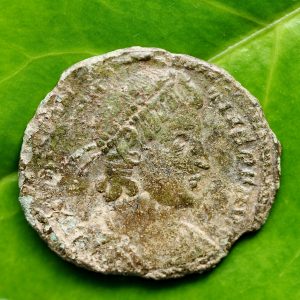 Description and comment: Emperor Constantius II 324 – 361 AD, born August 17, 317 AD. This centenionalis coin from the reign of the Christian Emperor Constantius II was found in Godmanchester and dated AD 352. Significantly, it bears the Chi-Rho Christogram, affirming Christianity as an official religion in Roman Britain and follows the example of Emperor Constantius I coins, which indicate that Christianity may be espoused by the empire. Constantius II was the second son of Constantine the Great whose own mother was St. Helen of Constantinople famous for her discovery of the True Cross in Jerusalem; the cross upon which Our Lord Jesus Christ was crucified. St Helen found three crosses. Amongst those three, she discovered the True Cross; when touched to a corpse, it was said, life returned to the body. 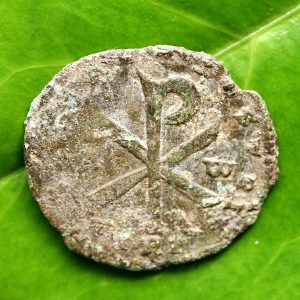 The coin’s reverse is particularly important because it bears the Chi-Rho, an ancient Christogram. In this case the coin not only had a religious significance, allowing the worship of Jesus Christ without fear of persecution, but it also had an official news information bearing function. Coins such as this acted as ‘minted proclamations’ carried to the far corners of the Roman Empire by traders, diplomats and the army.

It is likely that this coin, like so many, had a votive use, and could certainly have provided the owner with a feeling of protection in Christ. Coins such as these are unlikely finds in Christian burials which were largely conducted without grave goods. The worship of more traditional Romano British gods was still common practice so perhaps to many, it was just another bearer of protection provided by a deity – albeit a new and important one.

Of huge significance to ordinary Romano British mortals, the Christogram, which is flanked on this coin by the Alpha and Omega symbols, offers immortality, a vital building block for a muscular new religion which was to take over the Roman Empire and the Western World. The Chi-Rho is a Christian symbol consisting of the intersection of the capital Greek letters Chi (X) and Rho (P) which are the first two letters of Christ’s name in Greek. To the left and right of the Christogram appear the Alpha and the Omega, the first and last letters of the Greek alphabet. The famous revelation of the spiritual meaning of the Alpha and Omega comes from the Book of Revelations of St. John the Divine, the final book of the new estament written by John of Patmos, one of the disciples of Jesus, reputedly banished by the Roman authorities to the Greek island of Patmos. In Patmos St John thus records his vision of the Lord speaking these words: ‘I am the Alpha and the Omega, the beginning and the ending, saith the Lord, which is, and which was, and which is to come, the Almighty…. Fear not; I am the first and the last, I am he that liveth and was dead, behold, I am alive for evermore, Amen.’

Augustus the honorific name granted to the first Emperor (Octavian) on Jan 16th 27 BC can also be translated as The Illustrious One. It was a religious rather than political title, denoting authority over humanity and indeed nature. In the Later Empire, the title Augustus was given to rulers, signifying Emperor and again with a religious meaning.

Large Chi-Rho between symbols Alpha and Omega. TRP in exergue.

The Roman Mint at Trier was the principal mint for the Roman West and Trier is one of the oldest cities in modern day Germany: Officina refers to one of the Mint’s workshops. Some mints had a number of workshops. 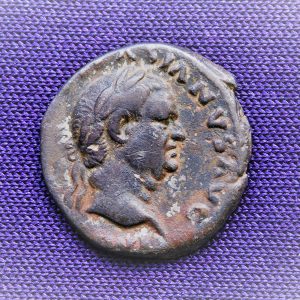 Description and comment: Emperor Vespasian, 1st July 69 – 23rd June 79 AD, born 17th November 9 AD. The obverse shows a fine portrait of Emperor Vespasian 69-79 AD and on the reverse a depiction of a Jewish female prisoner captive and bound. In 67 AD Nero had appointed T. Flavius Vespasianus to put down the Jewish rebellion and on July 1st 69 AD, the legions at Alexandria proclaimed him Emperor and he went to Rome leaving Titus to continue the campaign. Vespasian reached Rome in 70 AD and proved to be a just and hard-working ruler. 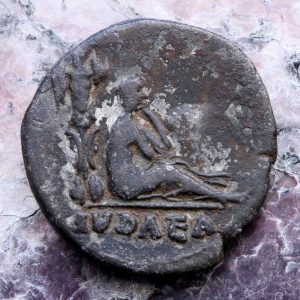 The reverse with its captive Jewish woman celebrated Titus’ victory over the Jews in AD 70 and the sacking of Jerusalem, which included the total destruction of Herod’s Temple as prophesied by Jesus before his crucifixion. In his sixties, admired and lauded throughout the Empire, Vespasian’s image on the coin assumes the power of an emperor deity, enhanced in the eyes of his subjects, especially his soldiers, by the victory over the Jews and the legendary sacking of the Temple. This coin becomes a feel-good, triumphalist votive object as well as just a coin.

Reverse: This depicts a captive and seated Jewish woman, hands tied before. Trophy of captured arms behind. IVDAEA in exergue.