The talk by Jasmine Allen on the Radiant Art of Stained Glass has been changed from 13th April to 6th April. The talk will be via Zoom and details on how to access the talk willn be sent to all members just prior to the date of the talk.

If you haven’t renewed your membership already and wish to do so then please contact David Smith by email info@huntslhs.org.uk or by phone 07886n 640177. Membership this year is £10 for Single and £15 for a couple.

If you wish to join the Society please download the membership form, found by selecting the membership tab at the top of the page, and send the completed form and payment to David Smith, details on the form.

Sadly we have had to cancel the planned Christmas Social on Friday 3rd December. The Wyton and Brampton Military Wives Choir has withdrawn on account of several members, some falling within vulnurable groups, having covid concerns. The latest predictions of what the state of the pandemic might be locally in a fortnight’s time are not encouraging.

Not wanting to write off the whole of December, we are plannong a Zoom based talk on Wednesday 15th, at ourn usual time of 7:30pm. Stuart Orme, Curator of the Cromwell MUseum, will talk on what seems in the circumstances a very apposite subject, ‘Did Cromwell Ban Christmas’. A reminder email with the Zoom link will be sent round to members a few days before.

Over the 25 years we have been able to make some 250 awards, distributing over £150,000 to support projects promoting the history of Huntingdonshire. In 2020, arising from the amalgamation of the Huntingdonshire Family History Society with the Cambridgeshire Family History Society, some of its assets were transferred to the Goodliff Fund to fund an annual genealogical award.

For details of awards made this year and previous years see the Goodliff Award tab.

We are now accepting applications for awards in 2022. See the Goodliff Awards tab for the application form and information on how to apply. 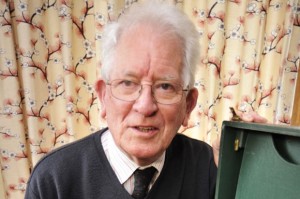 We are delighted to announce that our Vice-Chairman, whom we reckon the premier local historian of Huntingdonshire, David Cozens, MBE, has accepted the committee’s invitation to fill this important place in the Society’s public profile. David was our Chairman from 1974 – 2009, has written many books and contributed articles to ‘Records of Huntingdonshire’, the Society’s publication, and elsewhere, organised excursions including the original series of May weekends. David has also been a superb ambassador for Huntingdonshire’s history for more than 50 years.

Due the current Covid19 restrictions we concluded that to carry on with the concert by the Military Wives Choir was not possible, so the planned Social for the 4th December has been cancelled. Not wanting to cancel the whole Social we have decided to host an alternative evening of entertainment, using Zoom Meeting Rooms, on the evening of 9th December, starting at 7:30pm, as usual. Our Vice Chairman, David Cozens, will talk to us about the Edison Bell Company of Huntingdon and he will provide us with some historical festive musical entertainment from his extensive collection of 78rpm records.

Here are the answers to the Quiz ‘Who Might Use These’ that were in the Winter 2019/2020 Almanack Supplement.

Message from our Chairman – Impact of Covid-19

It will come as no surprise to you that due to the Covid-19 pandemic we have had to cancel our Annual General Meeting due on 15th April and our President’s first lecture to us, with presentation of Goodliff awards, on 20th May.  We hope to re-arrange both for the Autumn, but it is too early yet to say when that will be and our President’s lecture will depend when he can fit us into his busy diary, no doubt even fuller now with postponed events.

The Cambridge Historic Churches Trust conference on 18th April and Cambridgeshire Association for Local History conference on 2nd May, of which I promised to circulate details at our last meeting, have similarly been cancelled. How quickly the world has changed!  CALH and the Cambridge Antiquarian Society have cancelled its meetings into the summer.

We were in the process of arranging excursions and have a visit to Spalding arranged for Wednesday 10th June that is now also likely to be postponed.  That makes the lecture by Dr Stephen Parissien on Palace House Newmarket in the Huntingdon Town Hall on Wednesday 8th July our next meeting.  This event is in connection with the Huntingdonshire History Festival but even if the Town Hall has reopened for use it will depend to some extent on whether the Festival will go ahead.  A decision on that will be made no later than May.  During July we also have planned an evening visit to Leighton Bromswold church for Thursday 23rd July, followed by the opportunity for dinner at The Green Man. There’s no harm in putting these events in your diary now, but with a question mark.

The Goodliff Awards scheme continues. The deadline for applications is just one week ahead, on 31st March. The committee will assess these without meeting, which may take a little longer but applicants can expect to hear by the end of April at the latest if they have been successful.

We hope to produce a summer Almanack with excursion and/or meeting details as soon as it is safe to reorganise these.  Meanwhile we will endeavour to keep you up to date with developments, and David Smith will publish the latest information on the society’s website.  We are also thinking of sending out an occasional bulletin of some sort, which might just be some local history thoughts and jottings, so contributions to that would be welcome. Either get a friend to email them to me or give me a ring.

You will be pleased to hear that we have booked the Huntingdon Military Wives’ Choir for our Christmas Social at the Town Hall on Friday 4th December.  Let’s hope and pray that we shall be through this awful period by then and we will all be still here to enjoy it.

With very best wishes to you and your families during this anxious time, 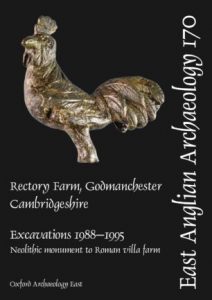 This article is reproduced with the kind permission of Oxford Archaeology East.

A book about the complex multi-period landscape excavated at Rectory Farm, Godmanchester has been published by East Anglian Archaeology. The site includes a Neolithic trapezoidal enclosure of national importance and a scheduled Romano-British villa. For details of the publication go to:   http://eaareports.org.uk/publication/report170/

Oxford Archaeology East was commissioned by Historic England in 2013 to produce this monograph. The excavations at Rectory Farm, Godmanchester were undertaken between 1988-1995 by Historic England’s (formerly English Heritage) Central Archaeological Service in advance of gravel quarrying. Aerial photography had revealed a Neolithic trapezoidal enclosure of national importance and a scheduled Romano-British villa. The site lies within the valley of the Great Ouse, along which extensive prehistoric landscapes have been the subject of archaeological work for some time. Many of these sites have been excavated by OA East, including the complex of Late Neolithic and Early Bronze Age ceremonial monuments at Brampton.

At Rectory Farm, the earliest activity was a large Early to Middle Neolithic monument consisting of a series of twenty-four large posts arranged with great precision and enclosed by a continuous ditch and internal bank with an ‘entrance’ on one side. A small mound further west evidently served as a viewing point for the trapezoidal enclosure. It is of unusual form and it is of particular interest in terms of its wider setting in a developing monumental landscape. Radiocarbon analysis dates the use of the enclosure to 3685-3365 cal BC (95% probability). This enclosure appears to be unique in the archaeological record and is therefore of national and international significance. The publication contains a major new analysis of its archaeoastronomical significance conducted by Professor Clive Ruggles of University of Leicester. The alignment of the posts with the early May and/or August sunrises suggests that the monument was used as a place for people to gather and mark the changing seasons, and possibly key points of the agricultural cycle.

This part of the Ouse Valley suffered regular flooding throughout the later Bronze and the Early to Middle Iron Age. Once the floodwaters had receded, the prehistoric remains influenced subsequent re-occupation of the landscape.

A Roman villa farm complex developed in three identifiable phases, linked by a road to the Roman town of Durovigutum (Godmanchester). Notable remains included a furnished cremation cemetery, set within a complex of gardens. One of these contained plant and tree species reminiscent of the Mediterranean style, while close to the cemetery and a possible triclinium (a dining area) was a kitchen courtyard garden with nearby bee hives. Three substantial wells nearby contained painted wall plaster, tesserae and a large column capital. The discovery of a finely made cockerel figurine within one of the wells may indicate an association with the god Mercury. By the early 5th century, the buildings were derelict, but although settlement had ceased the land remained in agricultural use until gravel extraction and landfill took place in the late 20th century.

The lead author was Alice Lyons, formerly of OA East. The project was managed by OA East’s Head of Post-Excavation & Publications, Liz Popescu, said “Oxford Archaeology is proud to have brought this major site successfully to publication – the results will undoubtedly be of interest to locals and academics alike.”

Brian Kerr, Head of Archaeological Investigation at Historic England said: “We are delighted to see the publication of a book about this important site, and we congratulate Oxford Archaeology East on the successful completion of the project that we funded. We are grateful to all our colleagues who contributed so much to the fieldwork, including a number of specialist analyses including human and plant remains, geoarchaeology and scientific dating.”

Oxford Archaeology is one of the largest independent archaeological and heritage practices in Europe, with over 250 specialist staff working out of offices in Oxford, Lancaster and Cambridge. Founded in 1973, we have over 40 years of experience in professional archaeology, and a tradition of quality, innovation and service on projects ranging in scale from domestic extensions to international transport infrastructure. We are a registered educational charity, we help people to discover and enjoy their heritage through our publications and outreach. Across the country, we have welcomed many thousands of visitors to our sites on open days, regularly provide presentations and information panels, and volunteers of all ages have participated in our wide variety of excavation and survey projects that span all periods of human history. For further information, visit our website: www.oxfordarchology.com

Based in Cambridge, Oxford Archaeology East (OA East) operates primarily across the East of England from the Thames to the Humber. It has existed since the 1980s, previously as a local authority in-house contractor and since 2008 as part of Oxford Archaeology delivering commercial services for development projects and community archaeology opportunities.

Historic England is the public body that helps people care for, enjoy and celebrate England’s spectacular historic environment, from beaches and battlefields to parks and pie shops. They protect, champion and save the places that define who we are and where we’ve come from as a nation. They care passionately about the stories they tell, the ideas they represent and the people who live, work and play among them. Working with communities and specialists Historic England share their passion, knowledge and skills to inspire interest, care and conservation, so everyone can keep enjoying and looking after the history that surrounds us all.