Description and comment : During the reigns of Tasciovanus and Cunobelin, 20 BC –40 AD. Like many coins from this period, it could have been used to pay soldiers to fight off the threatened Roman invasion. With its references to superhuman strength, Hercules, and the naked woman goddess, for fertility and hunting, this coin probably had votive and ritual power for its owners. 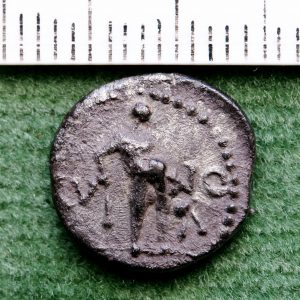 Obverse: The obverse of this small silver unit shows how Roman/Greek mythology was used by and popular with the Celts. The Romans called the Greek demigod Heracles – Hercules, son of Zeus, the Greek equivalent of Jupiter, and the mortal Alcmene. Here we see him depicted leaning heavily on a club with enlarged pectorals and stomach region. The obverse also shows CVNO, for CUNO the shortened form for Cunobelin King of the Catuvellauni. 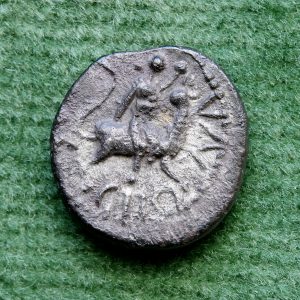 Reverse: Naked female sitting sideways on a feeding feline animal stepping right, tail raised. This is sometimes ascribed as Europa on a Bull or Diana on a Leopard. The inscription, TASCI IOVAN relates to Cunobelin’s father Tasciovanus. 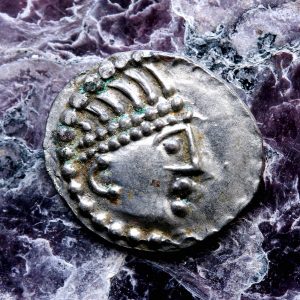 Description and comment: This Anglo-Saxon coin is known as an ‘anonymous’ due to its depiction of ‘kinghood’ rather than an individual king. The style of the bust, a diademed head facing right, shows Roman influence and is similar to efforts common on the old ‘Barbarous’ Roman coins some 500 years earlier. 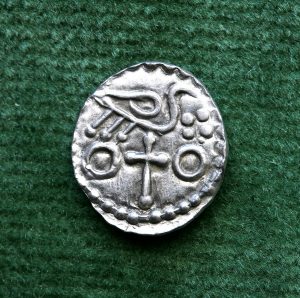 The reverse shows the impact of Christianity with the cross depicted between more traditional circles, amulets used by Celtic tribes in their earlier pagan design. The bird at the top of the coin above the cross represents the Holy Spirit as a dove.