The Group of Burial Goods 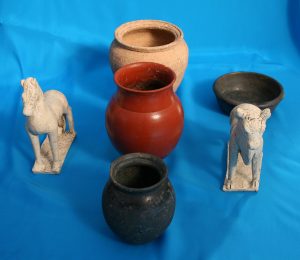 The Godmanchester cremation burial is so unique amongst Roman discoveries, that it is now in the British Museum courtesy of the late Mr Gerald Reeve’s wife Dorothy and his family. Already an expert on Roman artefacts with a fine collection found on his own land, Gerald Reeve discovered the cremation burial in 1991 whilst digging a foundation for his conservatory in Pinfold Lane, Godmanchester. The goods, later identified from the late 2nd Century, were in an area of approximately 340 mm square. 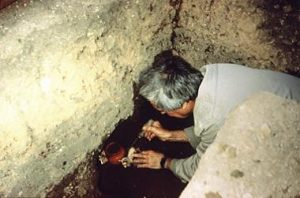 Gerald Reeve discovers the burial collection while digging a foundation for his conservatory. 1991.

Mr Reeve reported his find to Alison Taylor, then Cambridge County Archaeologist and lately President of the Cambridge Antiquarian Society who published an account in Britannia Vol 1997 pp386-393. Bone analysis was carried out on the cremated remains contained in the samian ware vessel and together with the size of the two small bronze bangles included in the burial, it was estimated that the child was a seven year old girl.

Although Roman citizens were not supposed to make a fuss about a young child’s death, reality often tells a different story here and in other examples in the Roman world. The samian ware vessel and figurines would have been purchased at great expense for a beloved daughter, lovingly sent to the other world with her little bangles.

The two pipe clay figurines, one a horse, the other a bull and both imported from Lezoux, in France flank the central cremation vessel, a samian ware drinking cup imported from the Rhineland. In front of the samian ware cremation vessel a black burnished ware drinking cup had been placed which could have contained a drink for the child. The group was enclosed, as was customary, in a wooden box, which had rotted away. A tiny gold clasp for the top of the box had dropped into the samian ware vessel and can be seen in the British Museum.

A black burnished ware dish was positioned to one side behind the bull figurine perhaps containing sweetmeats –dried fruit- for the child’s journey. At the back was a buff coloured calcite gritted ware cooking pot, likely to have held barley to make porridge for the child.

The two black burnished ware vessels have perhaps been brought in from Cambridge or Durobrivae to Godmanchester’s market place in St Ann’s Lane, but could also have been made in a local kiln. The calcite gritted ware cooking pot most probably came from a Godmanchester kiln. 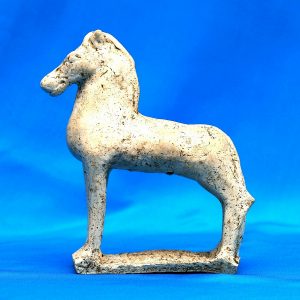 Description and comment: First reported in 1991 by Alison Taylor, and published in Britannia Vol 28 1997 pp 386-393, this burial group find is very fine and of international interest. Recently the entire burial collection has been deemed of national importance and the family who found it have donated it to the British Museum.

The exquisite horse figurine was found in the cremation burial of a wealthy girl child, aged approximately six or seven, in Pinfold Lane Godmanchester. The bones were tested and results published in Britannia. The late Mr. Gerald Reeve made the find while creating a conservatory. The horse is part of a group which includes the samian ware cremation vessel and another white figurine, the bull. Both animals flank the samian ware cremation urn containing the ashes of the little girl.

Horse and bull were initially considered to be childrens’ toys, but subsequent burial finds have indicated both figurines’ religious significance.

The horse represents the Celtic horse goddess Epona. Adopted by Rome, she became a popular goddess throughout the Roman Empire. This Romano Celtic deity was guardian to the gateway of Hades, an escorter of souls into the after life, protector of horses, donkeys and mules and was often associated with Roman cavalry and indeed cross roads. All of these attributes make her presence in Godmanchester apposite. The town lies on a dog legged cross road roughly between Ermine Street and the main Roman route from Colchester; finds indicate that Godmanchester’s roads were frequented by cavalry; there is a strong Iron Age/Celtic religious presence here; lastly, the town’s surrounding farmland contained mules and horses for the replenishment of travellers’ mounts on their way north.

Epona’s feast day in the Roman calendar is December 18th. Incorporated into the Imperial Cult, Epona is sometimes recorded in Roman contemporary sources as Epona Augusta or Epona Regina. She appears in Juvenal’s ‘Satires’ and ‘TheGolden Ass’ by Apuleius.

This perfect piece is rare in the UK. It is mould made, luted to the base and produced in Lezoux. The horse and accompanying bull figurine would have been bought at great expense for the burial, with little time, between death and cremation to bring the figurines from London or Colchester. This very likely indicates that such luxury wares were available in Godmanchester. 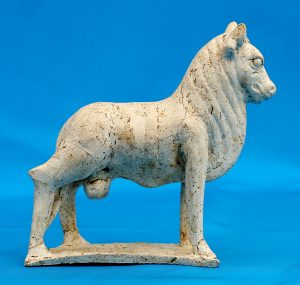 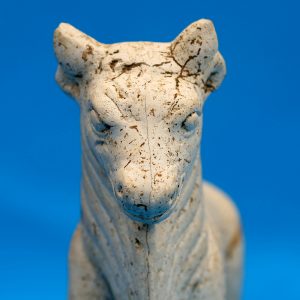 Description and comment: The bull was a sacrificial symbol to appease the gods and ease the passage of the child’s soul to the afterlife. Generally, the bull is a symbol of strength and regeneration promising in this case protection and a new life. A band around the bull’s belly symbolises the sash worn by a living bull taken to sacrifice. The bull is mould made, luted to the base and produced in Lezoux, France, where these sacrificial figures are found more frequently than in England. The presence of the sash indicates similar Romano Celtic burial practices in Gaul and in Britain, on the Fen edge, Godmanchester’s rough geographical position in ancient times. 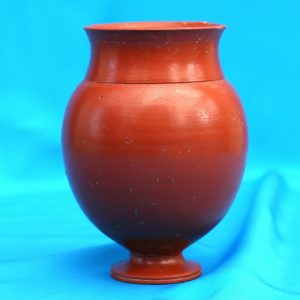 Description and comment: Samian ware drinking cup imported from the Rhineland. The vessel shows no domestic wear, see pristine bottom of the pot, so very likely it was bought for the cremation. The pot contained the cremation which is with the British Museum. The vessel has a neatly turned pedestal foot and girth grooves on the shoulder and above the foot. 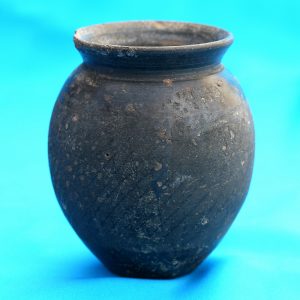 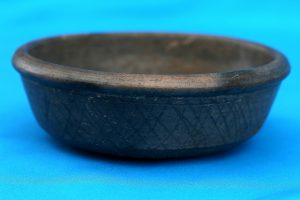 Description and comment: Black burnished ware dish, probably for dried fruit and located behind the bull figurine in the burial grouping. Lattice decoration. 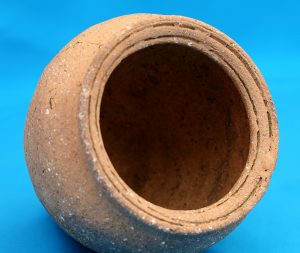 Description and comment: Honey coloured calcite gritted ware cooking pot, most probably placed in the burial with barley inside to make porridge for the little girl’s journey to the afterlife. The pot was very likely produced in a Godmanchester kiln. There were at least six kilns. (OAE findings.)

Found: Pinfold Lane, Godmanchester. Finder was the late Gerald Reeve while digging out his conservatory.